Day 44: I Went All In Without Realizing I Could Lose…

I’m sat amidst my mess of notes, still sifting and sorting while also trying to move files to make space on my full computer.

That’s the behind the scenes stuff that professional coaches, speakers and leaders rarely talk about because somehow the expectation has become that those who achieve great things are somehow different and don’t seem to face the same challenges. But it’s just not true.

Problems are an inherent part of the human condition because it is how we continually stretch and grow into an even better version of ourselves. It’s just the higher quality lifestyle we have, the higher quality our problems become because we get more removed from the dirt and dust of the mire of everyday life and can hire people to do the things we don’t enjoy as much.

I’m not at that place and I’m good with that right now because life at home with my Papa and cat, plus all the friends and connections I’ve made locally and online mean I’m very content being a frontlines worker which to me means shining like a Carebear and sprinkling magick on all of the people around me, to the best of my ability in each moment. And even though the pay is crap, the opportunity is amazing from a contact perspective so I’m truly as happy as could be!

When I was little I wanted to be a teacher and a cashier and I spent hours playing in my childhood playroom that is now my bedroom, practicing both at my chalkboard and with my calculator that made receipts – I was in heaven playing those roles as a kid and now I do them in real life and love it.

When I lived in England, my ex and I had agreed that my having such a job would be more inconvenient than it would be worth and he could afford to support us so I opted for supporting him and joining a Multi-Level Marketing (MLM) company that sold organic skincare products – Neal’s Yard Remedies (NYR) is truly a great brand and their training was amazing!

I have yet to share the baby report I created to help parents make a more informed  choice about the products to use on their little ones, as one strategy for standing out in a growing industry back in 2013 when I became heavily involved with the company and enrolled myself into as many of their trainings as I possibly could. It gave me access to other women involved in the company’s training programs so I was connecting with local leaders and I was meeting people with the house parties I was co-hosting and events I was booking so I was playing to my natural strength as a connector.

In the fall of 2013, just before my first anniversary as an Organic Skincare Consultant, the company announced an Incentive Trip to go to Boston and Rhode Island for a three day spa escape with the other three winners, as there were originally only 4 slots.

At the time I was involved in my upline’s Star training which meant weekly meetings near Birmingham with about 20 women committed to making this opportunity a success for us and our lifestyles.

When the incentive trip was announced I wasn’t really interested in going into the heart of winter on the other side of ‘the pond’ for three days so I wasn’t even considering going for the target until my Mom told me to see if I could pay the difference to book a three way flight back to Ontario to see everyone. I asked Denise Bonner who was the head of NYRO, the independent consultant division, and she agreed that would be made possible and so I decided to go for it.

I put everything I had into it too, meeting all the requirements by the deadline which not only required selling a lot of product and getting ten people started as consultants on my team, I also invested in quite a lot more than I would have otherwise simply because I hadn’t even considered the fact I might not win.

December 2nd was the day the call was to come in, that I was a winner, but by after dark when I hadn’t received a call yet I started to question what I had done. All the money I had invested and all the tentative plans I had made based on my efforts paying off, and suddenly I realized I had based it on a promise and I was the one that had to live with the consequences of my choices.

Fortunately I did get the call that night, soon after the doubt and budding stages of humiliation started to seep into my mind, and I was informed that I was one of the incentive trip winners! I was thrilled and then I asked the question that fully tipped me off to the power of my positive expectation that I was meant to be a winner so I could get home to see my family and enjoy the trip they had planned too.

I asked “which category did I win?” as there were four spots and the criteria for each were slightly different, and that’s when Denise hesitantly said “well… you didn’t really. But we’re giving it to you anyway” because apparently there had been 7 winners and two people weren’t able to attend those dates and so when then there were only 5 left in the pool, they opened an extra spot and gave it to me. Thank you God, Jesus, Allah, and whatever other box God gets put into, thank you!

I literally manifested that spot with my positive expectation and willingness to fully commit to my goal and connect with the company’s opportunities. Because that’s the thing about both the Universe and people, we love to see a worthy candidate win!

If I hadn’t won, I truly don’t know what I would have done because that experience ended up being a great adventure I’ll have to tell you to believe, as so many of my journeys have been, but I’ll save the story of my incentive trip adventure for another time. For today the memory came up on Facebook that it was 7 years ago today I’d posted that I won and I realized the power this winning lesson taught me.

Hold strong to the vision you have for yourself and expect that the Universe will conspire to serve you so long as you trust yourself to keep taking the next right step in faith that it is bringing you closer toward your desire. 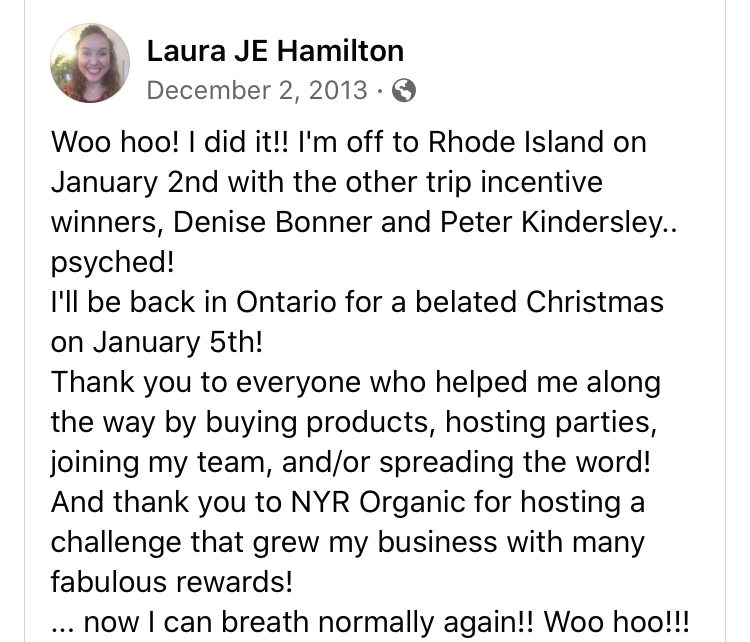 It was a lesson I’m glad I hadn’t thought of before I went for it fully to be honest, because if I’d given doubt a chance too early, I would have let my inner saboteur take me out and the outcome could have been very different.

Be willing to fully commit to your heart’s desires and realize that just because the rules are laid out a certain way, does not mean those rules have to be that way once motivated by the right frequency!

We talked about that indirectly last night in the INNER Child PEACE Summit and I’ll be getting that posted tomorrow at some point. For tonight I have plans after work that I intend to enjoy fully 🙂

As Jim Rohn shared in a lesson about being where you are, he said when you go to the beach with your family don’t bring your work with you and sit there doing it. Be fully at the beach with your family and enjoy them or you will go back to the office and wish you’d been at the beach when you were there. Like wise, when you’re at the office be fully present with your work. That way you call your whole self present to the task you are working on and can get more from the whole experience.

While seemingly unrelated, it’s reflective of my commitment to winning that trip and giving it everything I had while I was going for it.

After that trip I realized I wouldn’t be able to bring that business back to Canada with me when the relationship fell apart, and I knew it would, so instead of losing my man, my life in England and my business all at once, I started focusing my energies more on the coaching and spiritual advising part of my offerings. I was all in until I realized it had served its purpose for the first season of my life in England and it was time to move on. And that’s ok too, for everything is either for a reason, season or lifetime.

We’ll talk about some of the chapters that followed this one soon. Wishing you a phenomenal day in the mean time and look forward to sharing the Summit with you!