It’s an interesting time in our shared story and it is bringing up all the emotional impurities that need to be addressed for us to move forward in the New Orderly World we came to set the foundation for.

Today’s message will address the definition of terrorism and how, I believe, all participants in this week’s convoy of truckers need to beware the application of a status that could get them locked up, and why I’ve postponed the King’s & Queen’s Lawful Assembly scheduled for Saturday (Jan 29) in Toronto. 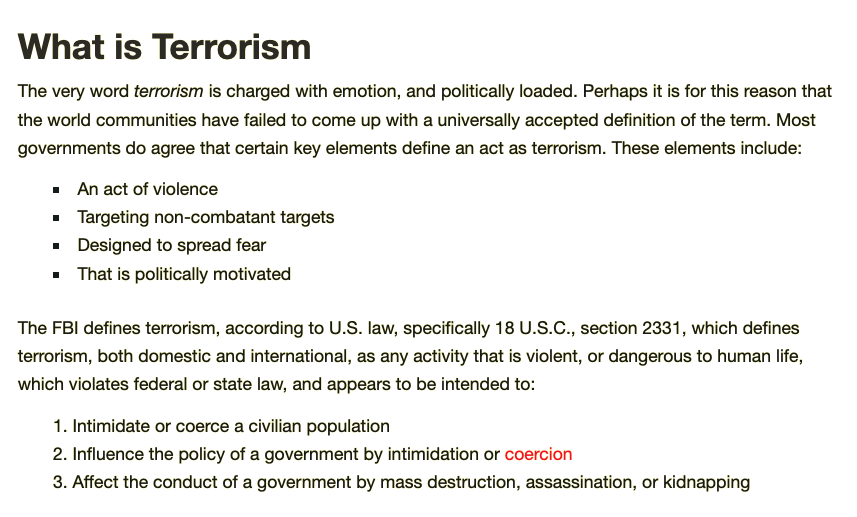 This definition of terrorism certainly applies to the mainstream media and corporations coercing men, women and children to compromise their cells and their future by taking in something foreign, in the name of safety and compliance.

That isn’t a pretty fact to wake up to if willful ignorance (intentionally not knowing/asking questions) has kept one from facing the facts up till now. Believe me, when the truth came clear to me before the con video game kicked off in full force it led me over the edge of sanity and straight back into my heart where presence lives.

Here’s the thing: the corporations currently leading the world under the guise of government and health organizations have been corrupted since their inception and designed their systems to silently enslave all who consented.

We are living through a spiritual war and the real territory being fought for is our mind, body and spirit.

Terrorism is an act of violence that targets the unarmed, is politically motivated and is designed to spread False Emotion Appearing Real which is exactly what we’ve seen en masse since this insanity began nearly two years ago.

What we seem to forget is that even though the government may be the corporeal body putting out the coercive measures, it is men and women enacting, enforcing and complying with them who are incurring the karma for doing so. And if karma seems a stretch to buy into then call it ’cause and effect’ or ‘choice and consequence’ with eternal implications.

Let’s break this down in a simple way.

A corporation is called a ‘corps’ in short form because it’s akin to what a dead and soulless entity is: a corpse.

Because a corpse is dead and lifeless, it requires another life force to lend it energy to bring it to life and help it move. This is why we’ve been conditioned to trade our lives for jobs in corps that pay us money in exchange that is backed by nothing but the trust we put into it; fiat currency is made legal tender by government decree yet has no value without this decree.

By acting against our personal will, values and morals on behalf of the corps, that man or woman acting in a public position accrues the karmic debts incurred by the corps for all harm caused by mandates they approved or enforced; you cannot extract blood from a lifeless form, thus if blood is required it must come from the one acting on be-half of the entity that caused harm, loss or fraud to another man, woman or child.

And so it is that we arrive to the convoy en route to Ottawa with demands of the Government to drop the unlawful mandates.

I have great concern that the committed men and women partaking in this journey may have the status of ‘terrorist’ applied to their person if they are rounded up and locked up for attempting to coerce the government to change policy as per the above definition. You can bet psychiatric evaluations would be ordered and alternative or ‘extremist ideations’ would have competent men and women locked up and medicated, if left unprotected.

To protect yourself from this a written notice must be created that corrects your proper standing as a man or woman in your private capacity with all common law (unwritten) rights reserved at all times. The claim to not be confused with your person (status) must be made, along with the right to not be a surety (liable) for your person (otherwise it’s implied we are).

I shared this in a live video earlier today just to bring awareness into the minds of those unsuspecting participants in the convoy who haven’t considered this possibility and haven’t protected themselves as a result.

As well intended as the majority of truckers participating may be, I fear this is a trap that plays right into the prescripting of Agenda 2030 which aims to drain the resources of those with money and assets early on, or lock us up, to get the strong out of the way of the vulnerable.

Part of the reason for scheduling the Kings and Queens Assembly in Queen’s Park for Saturday (which has now been postponed) was to support the creation of a more worthy and autonomous self-image so that we can create the vision we wish to step into ahead of time.

With all that is happening this week with the convoy and in my personal life with Papa having fractured his pelvis over the weekend (prayers gratefully received though he is doing well) I have decided it best to reschedule and will look forward to coming together with other men and women willing to create an improved image for ourselves ahead of time to grow into.

In the mean time I pray for every man, woman and child investing their energy (Time, Effort, Attention, Money) into this initiative. We are stronger when we stand united as this convoy is proving and hearts are stirred nationwide – may we prepare ourselves to face what comes from here.

Until men and women are held liable in their personal capacity, shows of unity like this that call entities to change cannot prove as fruitful as if lawful notices were issued and followed up on.